Art in my Life

ABC’s of My Personal History

Art: I raised my hand high in the air hoping to catch the attention of my second-grade teacher, Mrs. Smith. My arm bent at an odd angle because of my double-jointed elbow. I wondered if the teacher didn’t call on me sometimes because of the unnatural bend of my arm. She was wandering around the desks looking at the student’s progress on the construction paper cornucopias we were making for our Thanksgiving art project. The teacher had cut out all the elements; apples, grapes, squash, wheat sheaves and the horn-of-plenty, it was our job to glue it all together in the prescribed pattern posted on the chalkboard. I felt the taste of bile in my mouth and my stomach began to convulse. With my left elbow resting on my desk top I used my left hand to push my right arm higher and frantically waved my right hand in the air.

It was too late. I emptied my stomach on the floor in front all the other students in my class. The students in the desks closest to mine scattered, their art projects forgotten on their desks. Mrs. Smith in exasperation told me and all the other students that if we felt sick we had permission to leave the class room without consulting her. Too late for me who sat glued to my seat because of a class rule that dictated never leaving our seats without consent of the teacher and my innate desire to please.

Of course this moment is burned in my memory as one of the most humiliating moments in my young life. I also remember it because our art project was nothing more than a skills test to see if we could duplicate the image on the bulletin board. It never was about art or personal creativity. I would come to love the true expressions of art through the loving tutorial of an avid appreciator, my mother.

The summer before my third grade year I was sitting on an airplane with my mother and sisters winging our way from Colorado to Washington D.C. My mother sewed matching dresses for all us girls. Flying on an airplane was an occasion back in 1965. People dressed up to fly. We were all wearing pink floral sleeveless dresses with empire waists and a grosgrain ribbon as accent. The only one afraid of flying was our mother. When the flap on the wing went down she thought the whole thing was falling off. For all of us it was an amazing event. Dinners on our fold out tables, little activities to keep us busy and playing cards if we wanted them. We even got honorary pilot wings to pin on our dresses.

Washington D.C. was also the cultural capital of our nation. We lived twenty minutes away in Cheverly, Maryland our first year there and twenty-five minutes away in Lanham, Maryland the second year. We made frequent visits in to the Capital.

One of our favorite spots was the National Gallery of Art. I know I was too young to really appreciate all the beautiful artwork that was there but I do remember enjoying it and loved it when we would get postcard prints of some of the artwork. I’m not sure how my mother handled four little girls from five-years-old to thirteen in that maze of art exibits.

There was a painting by Jean-Honoré Fragonard called Young Girl Reading or The Reader. A print of it hung in my room for a long time. My mother liked it because she thought it looked like me. Little did we know that it would foreshadow my great love of reading. 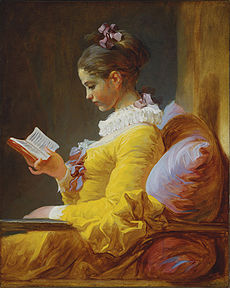 Her heart ached when we left Washington D.C. for the dry deserts of southern New Mexico. She actually cried when we drove into the desolate Mesilla Valley she would call home for the next forty plus years.

This desert oasis would become a Mecca for artists as the years progressed. With her daughters all out of the house she began cultivating her own artist spirit in earnest; taking classes in oil painting, watercolors and pottery. My walls are lined with art that she has produced through the years.

When I got married my mother gifted my in-laws with an oil-painting that sat above their much used and loved piano for all the years I was married, until their death, now it is in my home. 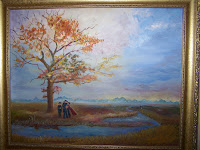 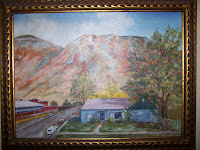 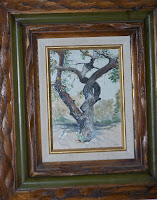 My middle-child Dallin had a lot of energy and a very active mind growing up. (He still does)We often despaired of ever getting him to sit through Church without a million disruptions. Then a miracle happened, Dallin discovered that he liked to draw. As long as he had a pencil and piece of paper in his hands he could sit through any meeting. He was oozing creative juices and in fifth grade was able to channel some of those juices in a program called Odyssey of the Mind. His fifth grade teacher, Mrs. Wilson, was his team sponsor. The team was given a problem, criteria and a small budget to put together a skit that would address this problem. They had to come up with sets, costumes and props that could be assembled and the skit performed all in under eight minutes. It was a perfect match for Dallin. They competed for three years and two of those years they represented the state in the world Odyssey of the Mind competition. One year they went to Memphis or Nashville and the other year they went to Washington D.C.

He is now an art major at UVU (Utah Valley University). His hobby is making puppets. Check him out at http://www.thegoldengluegun.blogspot.com/. This week he told me the local T.V. station is going to record the puppet shows he does at Provo Public Library, air it on their station and post it on YouTube.

The last two years we lived in Auburn, Alabama I had the honor of being part-time secretary and man-Friday for a professional portrait artist, Ronald Bayens. His studio is on the top floor of the Grey Stone Mansion. It had formally been the home of the President of Auburn University years ago. Ron had one room he painted in and then the other room was an office/workspace/storage. I paid his bills, answered the phone, kept up the painting schedule, made postcards of the painting for the customer, cut canvas, assembled stretcher bars and ran errands. I rarely worked over fifteen hours a week.

The best part of my job was being able to sit at my desk and look across the hall at Ron in action. We would discuss everything from religion to politics, books we were reading to the flaws in the school meal program. He mostly painted portraits of children. His customer base was from Birmingham to Mobile to parts of Georgia and he even had a few clients up in New York City. He painted portraits of an astronaut, an Olympic athlete, doctors and university deans.

I loved listening to him as he painted. He would get frustrated and swear or kick something. I would end up chuckling to myself in the other room but my favorite thing was when he would call me in to give my opinion of his latest work. I felt so honor that he valued my opinion.

You can view a sampling of his work at http://www.ronaldbayensportraits.com/. 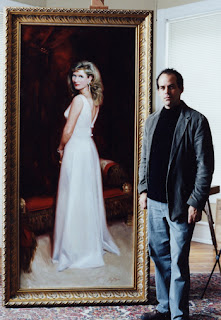 So as Dallas/Fort Worth/Arlington gear up for the Super Bowl we are having record breaking snow and ice. Four days straight of no school. We are dealing with treacherous driving conditions. John drives from OKC to Midlothian on Thursday evenings. Usually it takes him about 3 1/2 hours. Tonight it took him almost six hours. Tonight it is supposed to snow 1-3 inches.
Posted by Julie at 9:05 PM No comments:

Another place to find me

Check out my writing at http://www.julieblankenship.blogspot.com/